Man Up, Women, and Have That Tricky Testicular Talk 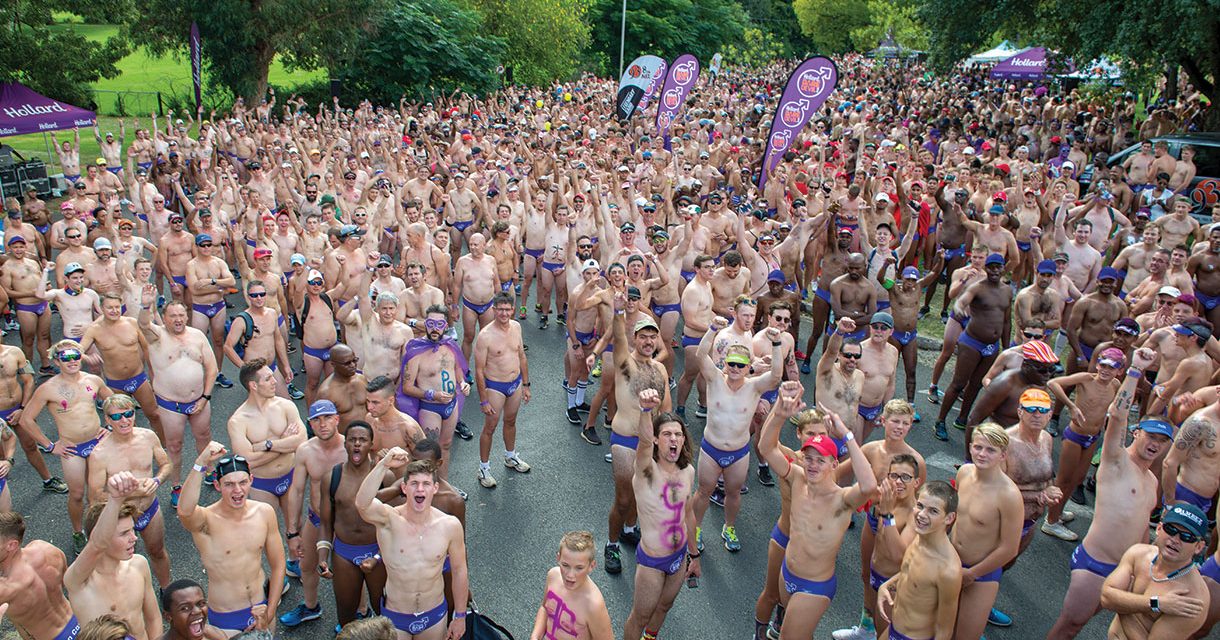 Men love to use the phrase ‘grow a pair’ when they’re urging each other to be brave. A pair of testicles or ‘balls’, the source of sperm and testosterone that makes men what they are. But the testicles can also harbour a killer cancer, along with the prostate gland, another male-only piece of kit. And men clam up when it comes to talking about cancer...

That’s why the Daredevil Run is such a clever way to highlight the issue, when men of all shapes, sizes, colour and ages run in nothing but takkies and Speedos to highlight the need to check for those scarily common cancers.

“Getting men to talk about their testicles and their prostate is a heck of a thing,” says Heidi Brauer, the chief marketing officer of Hollard Insurance, which stages the Daredevil Run each year. “The challenge is that it’s not talked about by men in general, and in the black community it’s an even more difficult topic to discuss.”

Often it’s the wife, girlfriend and the mother of sons who has to raise the tricky subject. “I’ve been married for 29 years and I have a son who’s 27 and another who’s 24. Growing up as a girl you’re taught to examine your breasts, but when you’re bringing up boys nobody ever says have you taught them to examine themselves and have you asked your husband if he feels his nuts? They need to feel their testicles regularly to understand what normal feels like, then if they feel any abnormalities, they’ll know to get it checked.”

Brauer has a degree in nursing which helps her speak freely about the diseases, scattering humour amid the facts. While it’s a difficult conversation to have with your partner or teenage sons, it’s far more difficult to fight cancer, she says.

“As Hollard we take what we do seriously but we don’t take ourselves seriously, and that’s how you need to approach this. Try saying, ‘so, my love, have you brushed your teeth, and have you checked your testicles in the shower because you need to look after your man-bits?’ They’re going to giggle because it’s weird, but there are lots of absent dads so we mothers have to do it. If it goes undetected these men will die and their families will be destroyed.”

Prostate cancer is more common in black men than white, with a risk rate of about one in five from the age of 40. Testicular cancer can strike from the age of 15, and affects white men more than black men. It often grows without any symptoms, but as it develops, the signs are straining to pass urine, leaking or bloody urine and bone pains.

They’re both very treatable if they’re caught early, but you can’t detect them unless you’re in detective mode.

You could start by encouraging your men to join the Daredevil Run. For its 10th anniversary in 2020 about 4,000 men will run through peak hour traffic in Johannesburg on Friday, March 13.

Most will be wearing purple Speedos with slogans on the back like ‘Shesa testa s’bali’ which means hurry and test, my brother, or ‘Heita holla testa mjita’ – hey hey, test, my guy. Other men will run in special printed Speedos, to show that they’re cancer survivors.

Before the run the men must collect their race pack at Hollard’s headquarters in Parktown. “That’s when they have to choose their size of Speedo and you say darling, it’s about your hip size, not your package,” Brauer jokes. “People ask if it’s going to be bigger than last year’s and I say size doesn’t matter! We just want to create a spectacle to start conversations.”

In a very practical step, men over 40 can have a cancer-screening blood test when they collect their kit or before the run. In 2019, a total of 3,970 men took part and 304 had a blood test. Twelve were advised to seek further treatment, which could mean a dozen lives were saved.

The event itself has an incredible atmosphere, Brauer says. “The camaraderie that comes from a bunch of men being brave together by taking off their kit and putting on a little banana sling is quite something. You can’t help but smile because it’s crazy. There are usually some magnificent men and the rest are every shape, size and age. I tell them you won’t be the hottest, but you won’t be the nottest.”

They start at Zoo Lake and run to Hollard’s offices, where they have a beer or a cold drink before running back to the lake. “When it’s finished you think they’re going to get their clothes on straight away but they don’t, they hang around in their Speedos because they feel proud and invincible and they share their pictures of running cancer out of town. Suddenly they’re having conversations about male cancer, and that’s what we need.”

The Daredevil Run is open to all males, with men over 18 asked to donate a minimum of R100 to enter, plus R50 for the Speedos and R10 as an admin fee charged by the ticketing system. All entry fees are donated with 80% going to the Cancer Association of South Africa for testing and counselling in underprivileged communities, and 20% to the Prostate Cancer Foundation for research and awareness programmes.

DareDevil Run
In your comments, please refrain from using offensive language and unnecessary criticism. If you have to be critical, remember – it must be constructive.